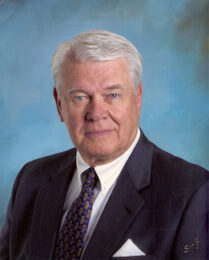 It is with great sadness that we announce the passing of Mr. Tom Short, Anadarko Industries’ former President and CEO.  Passed away at 85, he had a tremendous impact on the space industry working on the Apollo and Space Shuttle programs.  After a highly successful endeavor as President/CEO of Johnson Engineering and then as Senior VP of SPACHAB, Tom took a couple of years off before one last, but significant, run as President/CEO of Anadarko Industries.  However, this time he started from scratch as he was “Employee #1”.   Tom served in that capacity from the time the doors opened in 2003 until February 2016.  He always loved the idea of us being able to help the Wichita Tribe and celebrated the milestone of us providing over $10M in distributions back to the Tribe.  Even after he stepped down as President/CEO, he never stopped helping.  He continued to support under his President Emeritus title always wanting to network and make connections.  He will be missed dearly.

In the late 60’s and early 70’s, Tom Short was an executive with North American Aviation District Office working on the Apollo Program. In 1973 he was promoted to the position of Vice President of Field Operations for the North American Rockwell Space Division in Downey, California. Subsequently, this business unit was awarded the Space Shuttle prime contract. In 1976, Tom accepted an offer to become the president of an oil and gas services company in Calgary. This led to his ownership of several successful companies in that industry. In 1987, he returned to NASA projects when he and two partners purchased Johnson Engineering (JE). Former Astronaut Gene Cernan, the last man on the moon, was the Chairman and Tom was the President and CEO. Together they built JE into a highly successful company with over 800 employees. JE was acquired by SPACEHAB in 1997. Tom stayed on as a Senior V.P. of SPACEHAB until July 2001. He was then recruited to lead the formation and development of Anadarko Industries as the President and CEO.