Harlan Warren, who started working for Anadarko Industries in 2007, works on the IT Support Services contract for the USDA as the Task Order Lead for the Saint Louis Large Office.  He was born in Columbia, MO a small – to mid-size Midwestern town, 125 miles from Kansas City and Saint Louis, and is a graduate of Columbia, MO Hickman High School and Fisk University which is known for the Fisk Jubilee Singers.  He’s the middle of three siblings, and has two sisters that also reside in the Columbia area.  Besides living in Saint Louis, MO, he’s lived in Nashville, TN; Dallas, TX; Detroit, MI; and Jacksonville, FL.

His IT career started in Dallas, TX working for Hallmark Electronics as a Computer Operator Trainee.   He was hired by Unisys Corporation as a computer operator, eventually transferred to Unisys Corporate Headquarters in Detroit, MI as at data center manager. Unisys Corporation was having financial difficulties, so he found a career opportunity working for Saint Johns River Power Park/ Jacksonville Electrical Authority for six years, then was hired by Deutsche Financial Services (DFS) based in Saint Louis as a Technology Officer.  Working for DFS was the highlight of his IT career, responsible for implementing Computer Associates, CA Unicenter software throughout United States, Canada, and Europe.  Software agents were installed to manage the entire IT infrastructure, these agents were used to monitor overall health of network, and to inventory/install software on all desktop computers and servers, and the CA Unicenter project was very important to the success of the Y2K project.

Harlan manages the Saint Louis Large Office, overseeing hardware refresh and operating systems upgrades for Windows 7 and currently Windows 10. He and his team recently completed the switch upgrade project that saw sixteen Cisco switches replaced throughout the Goodfellow Complex.  Prior to that he oversaw the relocation of the USDA’s Saint Louis Office to its current site, during which he and AI staff were responsible for the migration of all users’ computer hardware and peripherals. Close to 3,600 peripherals or pieces of IT equipment were moved during the relocation.

Harlan participated on most of the school’s athletic teams, including football and basketball, but loved track & field the most as attested to by the multiple wins he had under his belt.  Now his hobbies are mostly focused on classic and sports cars, especially the 1968 Mustang his dad bought him back in high school, although it needs a restoration.

One of the highlight’s of his life was when his daughter was born, another when she graduated high school, and soon will be a third when she graduates from the University of Central Florida where she will be a senior this fall.  Although he also admitted that attending the Houston Rockets Orlando Magic matchup in Game 1 of the 1995 NBA Finals ranks up there for him as well.

He has developed found memories while traveling with his family, including one very memorable childhood trip to California that included Disneyland and China Town, as well as a day at the beach.  More recently his travels have taken him to the Dominican Republic, and he’s looking forward to a trip to Cancun, Mexico later this year.

His personal motto is to “keep moving forward regardless of what challenges you may face.” 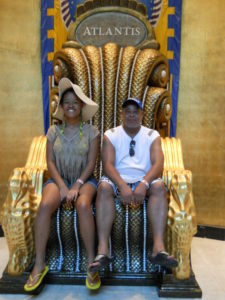